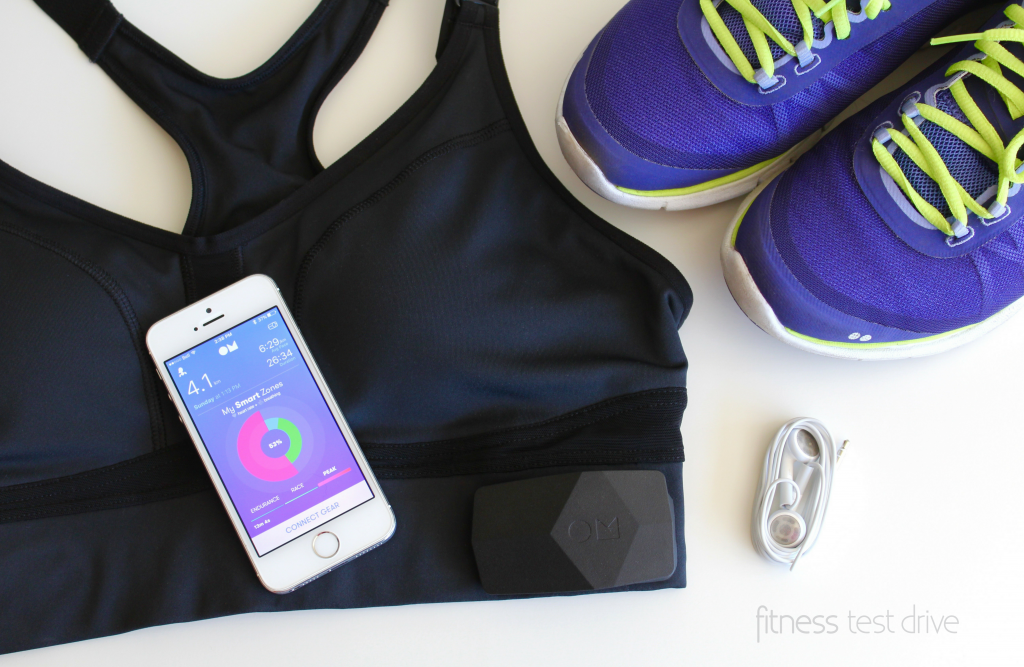 February 2019 Update: Looks like this fun techie sports bra is no longer available to shop online. But I’ve decided to leave this post here because it chronicles how technology can help you improve running performance. Plus, I can see OMSignal, the maker of this bra, is still involved in smart wear, including bras and even a sleep camisole. I’ll be keeping an eye on what they’re up to next.

What It Is: A smart sports bra with a detachable tech-device (called a smart box) that tracks running metrics such as distance, cadence, pace, calories and heart rate. OMbra also comes with a sensor that calculates your breathing frequency, depth and balance.

This breath-tracking feature is kind of a big deal because the bra, paired with its companion app OMrun, coaches you to breathe more consistently and rythmically as you work out. The better you breathe, the more energy you conserve (during and after exercise) and, ultimately, the more fit you become.

What You Might Not Know: All the tech and textile production for OMbra happens under one roof, and that roof is in Montreal. A lot of sweat went into making the OMbra, literally: OMsignal, the company behind OMbra, produced and tested more than 2,000 prototypes before arriving at the current design, which launched online and in stores in Fall 2016.

While OMbra is clearly fit-tech designed for women, there’s also a men’s workout shirt from OMsignal that tracks all the same metrics as the sports bra.

Feelin’ the Love: As a fitness professional with an affinity for both fitness fashion and fitness technology, I was keen to try out OMbra. I’ll admit, though, that before I got my hands on it, I half expected it to score high on fit-tech features and score mediocre on design and comfort. As it turns out, the OMbra sports bra took away top ratings across the board. Here’s why… 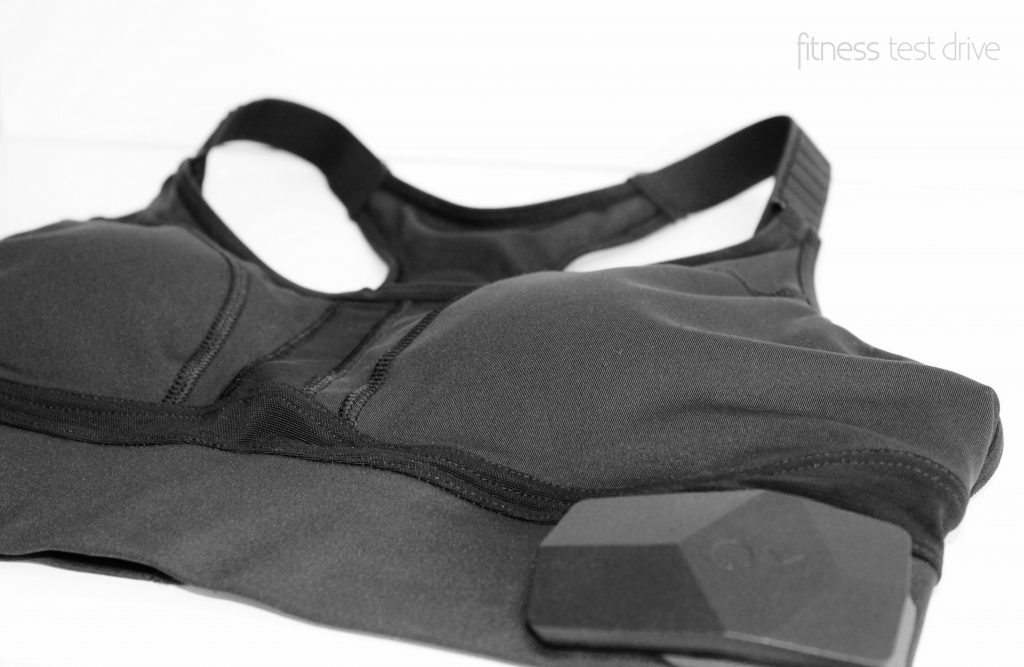 Technology aside, the bra possesses all the details you’d want in a comfortable sports bra, and then some. The fabric around the band is supportive but slightly stretchy. I think the fact that it didn’t feel at all restrictive around my ribcage helped me breathe more freely.

In addition to removable pads and a bit of breathable mesh where you’d expect to sweat the most (under-boob, cleavage, back), my favorite feature for comfort and fit was OMbra’s unique strap adjustment. With sturdy loops running along the length of each strap, you can easily hook into the strap wherever you feel the need for a tighter or looser fit.

To fire up the fit tech, you have to charge the smart box then “snap” it into the sports bra (see pic below). The box will momentarily vibrate to let you know it’s connected. Open the OMrun app (downloadable from the App Store) and wait for the two to sync. Pretty quickly, you’ll see a reading of your heart rate and a circular graphic that expands in real-time as you inhale and retracts as you exhale. Even before I ran, I used this feature to help slow my breathing for a few moments of calm.

BTW, you’ll want to wear the OMbra either on its own, like a bra-top, or under a loose-fitting shirt. I tried it with a body-con workout tank, but the box looked like an oddly conspicuous lump under my shirt. 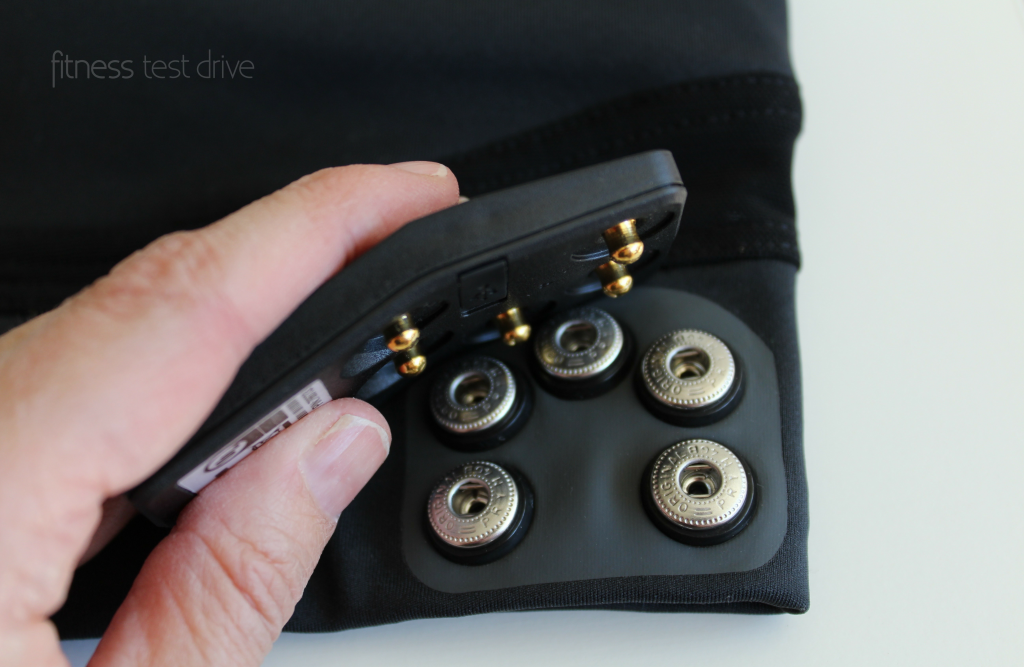 Out on a run, the OMrun app informs you throughout if you’re hitting one of three zones: Endurance, Race or Peak. Afterward, the app sums up calories, cadence, average heart rate and breathing rhythm, but you can view even more metrics by logging into your account online. Of all the data, I found it most interesting to see how long I hoofed it in each zone, including where I was along my running route at the time (thanks to the app’s use of GPS).

I was surprised that I spent most of my time running in Peak zone and hardly any time in the less-vigorous Endurance zone. At first, I thought this was admirable—hey, I’m faster than I thought!—until I learned my smart bra actually wants me to slow down and run according to an 80/20 rule: Spend 80% of your run in the Endurance zone and 20% in Peak (apparently, you should scratch the high-intensity Race zone unless you’re actually in a race).

The rationale is you’ll reduce your risk of overtraining and injury while gradually ratcheting up your energy and fitness level. On this advice, I set out for my next run determined to stay mostly in that Endurance zone. The results? Mixed.

On the plus side, the run felt quite manageable. When I run faster, I’m usually thinking, “OMG, can I stop yet?” at every turn. With an Endurance-focused pace, I was able to mindfully enjoy my workout and surroundings a lot more.

Downside: My legs craved more speed, partly because I’m used to pushing myself (self-admitted Type A), and partly because of ego. I worried that I might appear hopelessly out of shape going at such a decelerated pace. In reality, I was only able to stick to Endurance 42% of the time instead of OMbra’s suggested 80%. Ironically, taking it easy was harder than I anticipated. 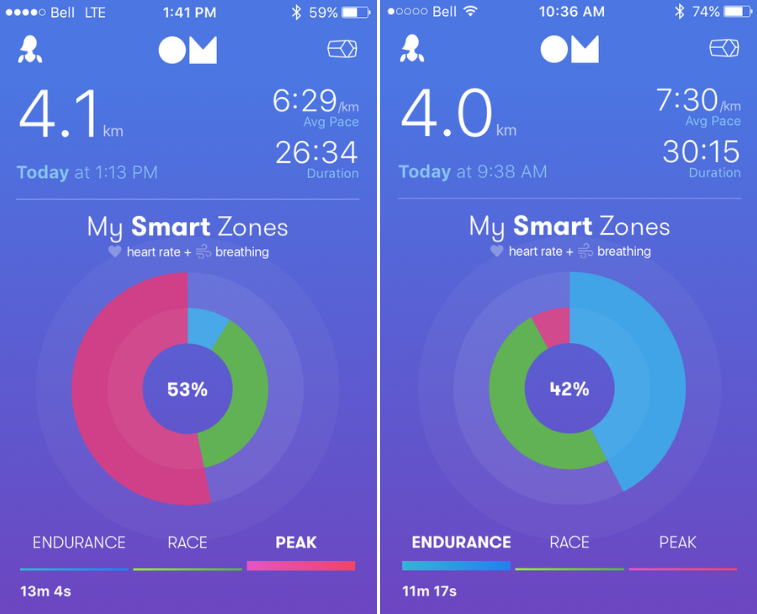 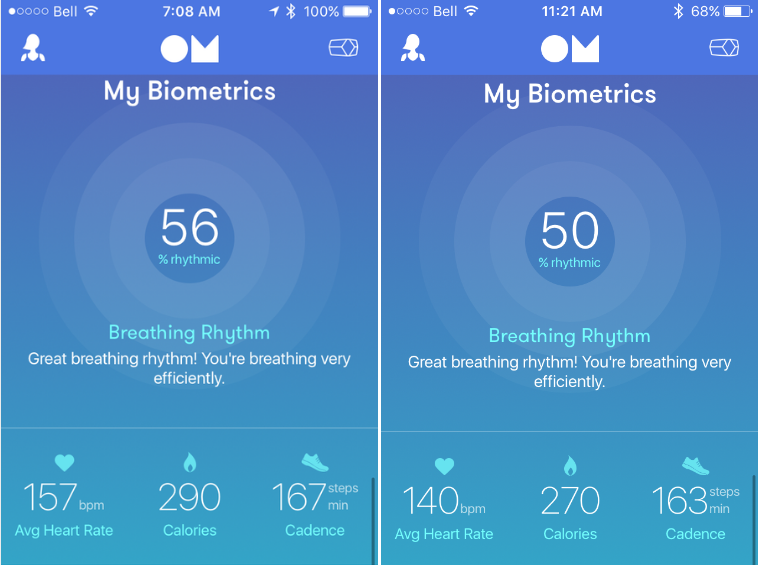 Naturally, it took longer to run approximately the same distance but at a slower pace. But—wow!—cadence and calorie burn were similar both times even though my average heart rate was noticeably lower.

Surprisingly, I didn’t breathe as rhythmically on the easier run, which I attribute to the unfamiliar pace temporarily affecting my mechanics. Post-workout, I felt much less “beat up” after my Endurance run than previous ones. Overall, I’m excited to keep trying this approach to see if I can ultimately start moving faster within my Endurance zone.

Update: I’m making progress as I continue to run with my OMbra. These are the metrics (below) after my 7th run using OMbra. Now I’m able to stick to the Endurance zone for the suggested 80% of my run. My breathing and pace efficiency are improving. More importantly, I’m actually starting to enjoy running, and I’m more motivated to do it. My next goal is to hit the Peak zone more often. 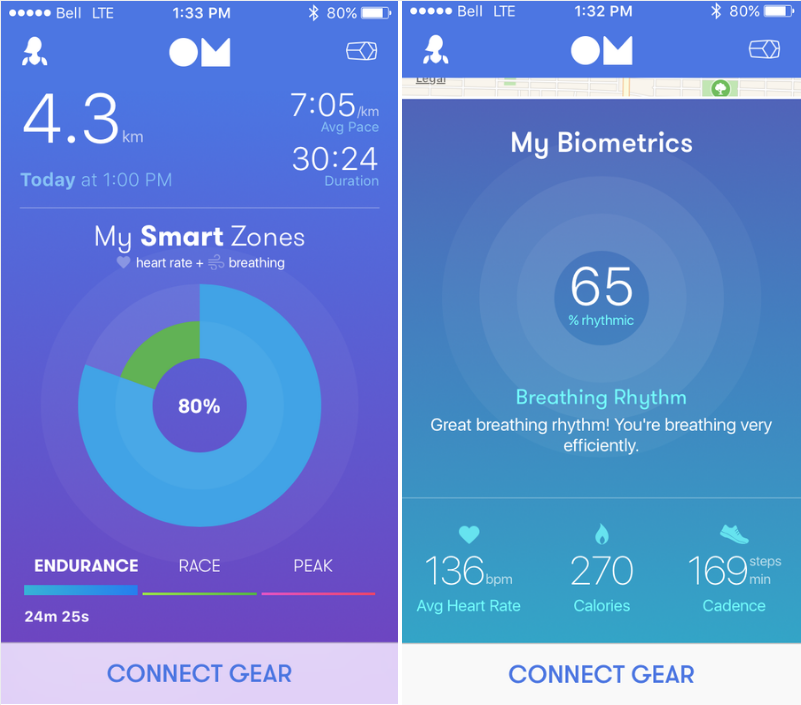 If I Could Change One Thing: A few small requests…

Should You Buy It? For a superior sports bra that also acts as a personalized running coach, I say, yes, get it! (But you need an iPhone.)

Make sure you order the right size for you—it might not be what you think if you’re just going by your usual bra specs. Use the bra-fitting video tutorial on the OMsignal website to measure yourself. Proper fit helps you get the most out of data readings from the bra’s built-in sensors.