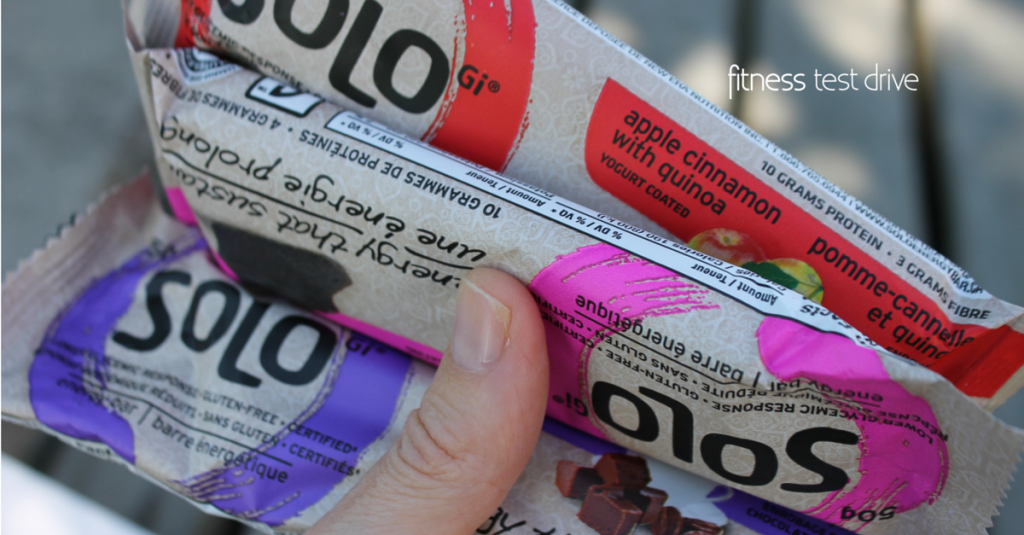 What It Is: SoLo Bars are gluten-free energy bars with flavors reminiscent of your favorite desserts, but everything’s 200 calories or less! There’s Lemon Lift, Mocha Fudge, Peanut Power and more. Each bar has around 10 or 11 grams of protein (Peanut Power packs a bit more) and 3 or 4 grams of fibre.

What You Might Not Know: These bars are low glycemic with slow-release carbs, which means you can count on them to provide even-keeled, sustained energy and not slam you with a blood-sugar spike’n’crash. FYI: Diabetic-friendly.

Feelin’ the Love: What’s not to love about anything that’s chocolate coated? (A few flavors are actually yogurt coated—I loved them too.) SoLo sent me a bar in each of their * flavors, which meant I got to savor the process of deciding which one I liked best. *More flavors have been added since I first wrote this review. 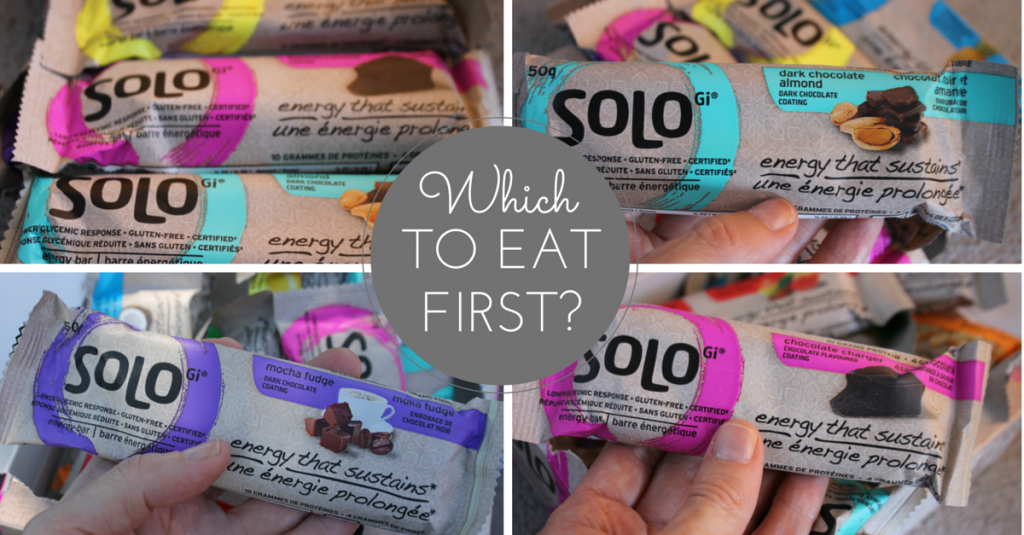 My verdict: yummy. Although nutritious, they don’t have that vitaminy aftertaste you get with some healthy bars. In fact, there wasn’t a SoLo flavor I didn’t like. Sure, I found some more delicious than others (Dark Chocolate Almond, duh). But even the ones that didn’t sound all that appealing to me when I first read the package ended up being quite good. Sorry I doubted you, Apple Cinnamon with Quinoa.

Because I’m me, I put unnecessary pressure on myself to choose an absolute favorite flavor, and, in my opinion, it just so happens to also have the best name: Chocolate Charger. Why this one? Unadulterated chocolate taste. Update: Since the time of this review, SoLo has added new flavors. My new favorite: White Chocolate Cherry. When traveling, I like to stash a couple in my carryon for easy airplane snacks. 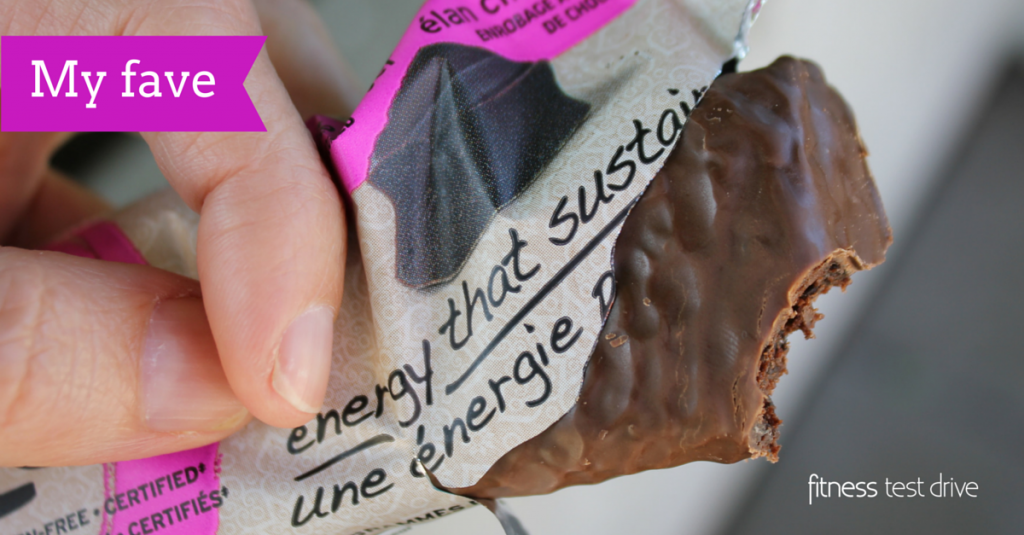 Let’s talk about the bars’ consistency. A SoLo bar fan on Twitter tweeted to me about them being “softer” than other bars. Yeah…and decadently chewy too. Some have hints of crispiness inside. Let’s just say the consistency is satisfying. Like a brownie. 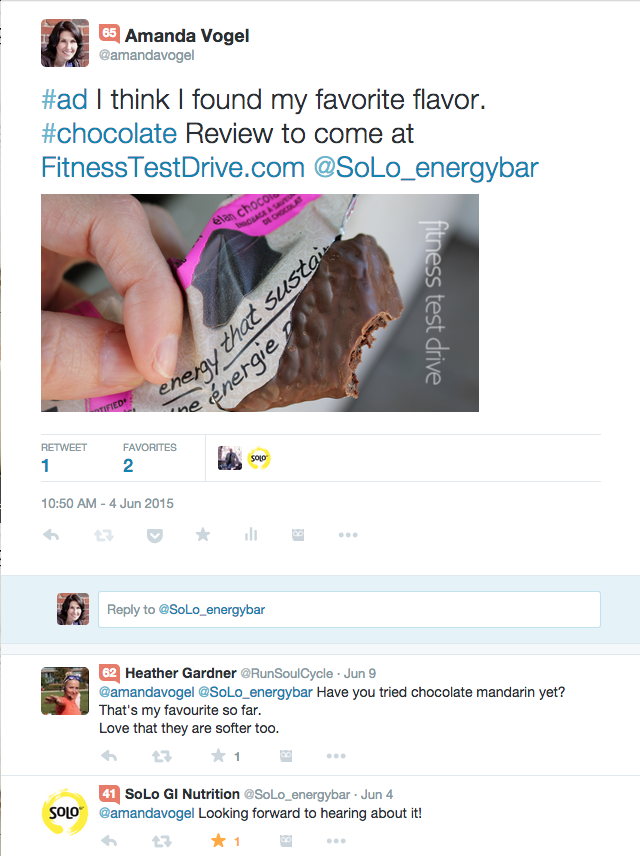 Finally, there’s the low-glycemic story. I was impressed when I learned that whatever technology SoLo uses to get the sustained energy effect in its bars was “developed in collaboration with the inventors of the Glycemic Index and funding from the National Research Council of Canada.”

That’s pretty official—Glycemic Index (GI) is commonly used to rate carbohydrate foods for how fast or slow they digest and raise blood-sugar levels. The lower a food’s GI, the more gradually it releases energy, which is cool for helping you feel nicely balanced and not like you’re riding a big sugar-buzz.

My habit was to eat a bar about 45 minutes before a workout—with lots of water. The result? A steady energy flow that, I think, made me feel stronger throughout. That’s right, I believe I rocked my workouts on SoLo. 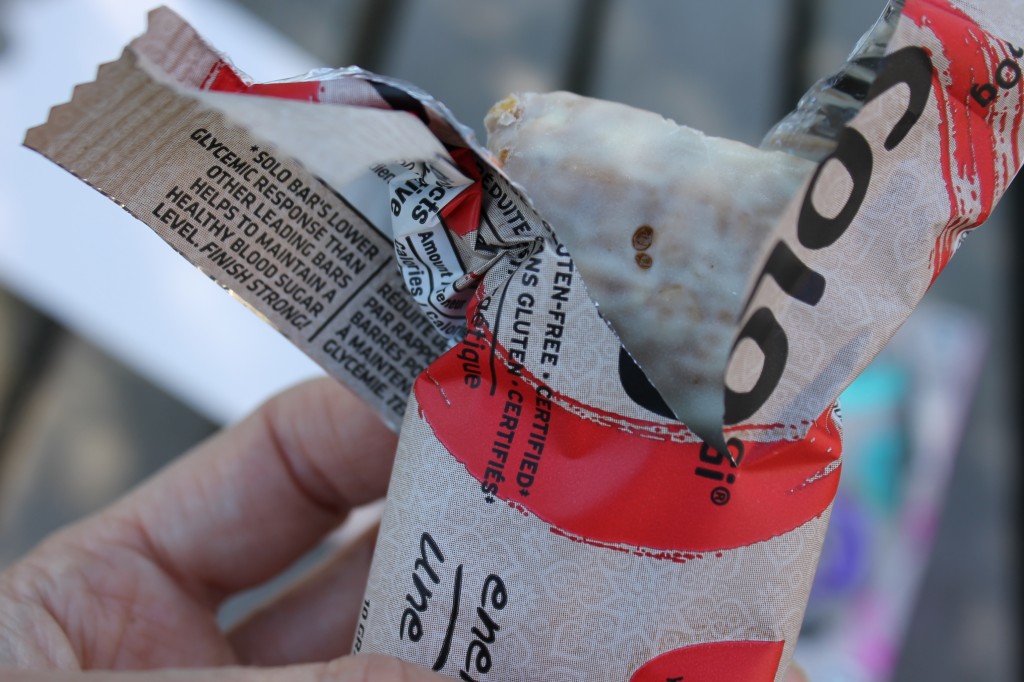 If I Could Change One Thing: They’re on the sweet-toothish side, so if you’re more into savory snacks, these might not be your jam. Most of the bars are hovering around 18-20 grams of sugars from sources such as fruit purees, honey, brown rice syrup and fructose. Nothing artificial and no high-fructose corn syrup.

Should You Try Them: Yeah, of course, they’re only somewhere around $2.50 each. Try them as a pre/post workout or travel snack. Shop the website from Canada or the U.S.: www.soloenergybar.ca. Also in select stores, including Loblaws, Whole Foods and Shopper’s Drug Mart.

*Disclosure: This post is sponsored by SoLo Energy Bars.